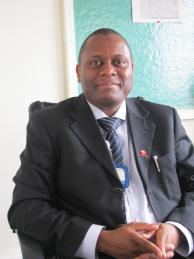 Herbert Zake is the head of corporate affairs at Standard Chartered Bank Uganda, which has 11 branches and 600 employees in the country. He is an active champion of the United Against Malaria (UAM) campaign and a committee member of the Private Sector Health Common Fund for maternal and child health in Uganda.

Since 2006, Mr. Zake has been involved in Standard Chartered Bank's efforts to invest in malaria control—a combined $1 million through 2008, and another $5 million through 2013, benefiting 17 countries in sub-Saharan Africa. Through the NetsforLife partnership, the bank has had a hand in distributing almost 1.5 million nets in Uganda alone, often in remote areas where churches and faith-based organizations provide the only trusted delivery systems.

Working with Voices, Standard Chartered Bank Uganda has educated its workers and partnered with UAM to raise awareness and funds for malaria control in the community, participating in UAM events since World Malaria Day 2011 and adopting pillars of Malaria Safe, UAM's private sector program. The bank has also made long-lasting insecticide-treated nets available to employees and clients at a discount.

For his leadership and example to the private sector, Mr. Zake has been featured in the Ugandan press as well as the British newspaper The Guardian, which praised the bank for its partnership-building. "We thought that if we brought other organizations on board we could actually have a much wider reach, and that is exactly what has happened," he told The Guardian in February 2013.

Mr. Zake also sits on the steering committee of the Private Sector Foundation Health Common Fund, which launched in May 2012 to benefit women and children in Uganda, with technical assistance from the Ministry of Health, and Voices.

“Everyone has a part to play,” he says. “We can’t just sit back and say, government will do this or that. Government resources are limited. We have a duty as corporates to lend a hand. If we pool our resources and put our heads together, we can achieve a lot in the fight against malaria.”