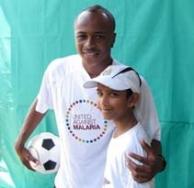 By David Kyne, United Against Malaria

During this year’s Africa Cup of Nations, the continent’s premier soccer championship, some of Africa’s most popular players are lending their voices to further the fight against this disease. Several of the continent’s stars will share life-saving malaria prevention and treatment messages through United Against Malaria soccer-themed television public service announcements (PSAs) that will air in malaria-endemic countries in Africa throughout the tournament.

The new United Against Malaria PSA series was developed to educate viewers on simple steps that can help protect them and their families from malaria, including sleeping under treated mosquito nets and seeking medical assistance at the first sign of fever.

United Against Malaria has seen tremendous success with this approach in previous years. For instance, a survey conducted in Tanzania found that United Against Malaria PSAs broadcast during the 2010 World Cup significantly influenced prevention efforts, with some 6.6 million Tanzanians taking action to protect their families from malaria following exposure to the TV and radio spots.

Several of the soccer stars in the new series, including André (Dede) Ayew from Ghana, Gervinho from Cote d’Ivoire and Moussa Sow from Senegal, understand the burden of malaria firsthand, because they themselves grew up in African countries where the disease takes a tremendous toll.

As the new PSA highlights: “All children deserve a chance at greatness, just like their heroes on the soccer pitch.” We are so grateful to these stars and their national federations for using their influence to raise awareness about malaria so that more African children can remain healthy, happy, and able to achieve their own dreams.

Above, football superstar Gervinho distributes nets in his hometown in Cote d'Ivoire.